Passion is a word both George and Tonny Murray lived by. Now, with an impactful legacy gift, part of their passion will remain in the College of Engineering for years to come.

George and Tonny Murray’s story together began on New Year’s Day, 1957. George was working on his Ph.D. at Columbia University and Tonny, a Dutch citizen, was working at the Netherlands Consulate. As fate would have it, George’s roommate was Dutch, and Tonny’s Dutch neighbor threw a party. That chance meeting would seal a partnership lasting more than 60 years—they married in 1958 after George received his doctorate. 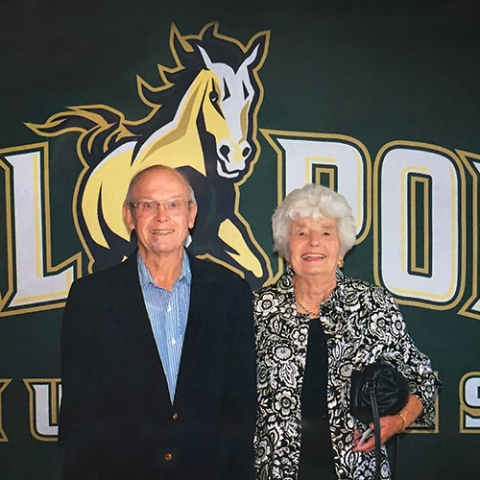 Early in George’s career, the couple bought a home in Woodcliff Lake, New Jersey, to raise their two children, daughter Karraine and son Michael. The rolling green hills and slower paced life was a backdrop as George co-founded Materials Research Corporation, where he served as director of research then corporate vice president. Upon completion of his career at Materials Research Corporation, George and Tonny found a new home in San Luis Obispo when George began a career as professor of Metallurgical Engineering at Cal Poly in 1978.

“My dad had a firm belief in the necessity of education,” said Karraine, who received a Bachelor of Arts from University of Colorado. “He really enjoyed teaching and it was a very nice change for him from the corporate world.”

As George focused on teaching and mentoring future engineers, Tonny made friendships quickly through the Cal Poly Women’s Club, where she served as an officer and member of the board for several years. She also focused on community outreach, like feeding the homeless, and was an avid lap swimmer. George loved gardening, and his vibrant roses often won ribbons at Poly Royal. When George retired from Cal Poly in 1992, both could often be found walking their golden retriever, Cindy, around Laguna Lake, golfing and hosting friends for cultural events until they moved to Pacific Palisades to be closer to their children in 2018.

“They felt very involved and engaged in the community,” Karraine said. “Living in San Luis Obispo were the happiest days of their lives.”

They were also the happiest days of George’s career.

“I found my interaction with the students provided me with the most ‘fun’ job I had experienced since I entered the job market in 1949,” George once said.

While teaching he served as the department chair from 1984 to 1986, published the engineering textbook, “Introduction to Engineering Materials,” and published over 30 papers in peer-reviewed scientific journals and trade magazines.

“Our dad came from absolutely nothing and it was very important for him to remember that and to help others,” said Michael, who graduated from Cal Poly in 1986 with a degree in Industrial Technology. “He wanted to always ensure that he gave back in a way that benefitted the students. First as a professor, then through a scholarship.”

George and Tonny established the George T. and Tonny Murray Scholarship Fund, which benefits students in the Department of Materials Engineering. They also left a generous planned gift.

“Professor George Murray gave an incredible amount in gifts to Cal Poly over his lifetime in the form of scholarships to Materials Engineering students,” said Trevor S. Harding, chair and professor of Materials Engineering. “His generosity helped dozens of bright sophomore students continue in the program despite financial hardship.”

George and Tonny possessed generous hearts in life. They will be remembered for their commitment to helping others and their belief in the value of education.

The Sakamoto family has a long history with Cal Poly. Now they are giving back to help provide opportunities for others.

IBM Executive Bill LaFontaine Wants to Inspire Others Who Have Benefitted from Cal Poly with a $50,000 Matching Gift