Skip to main content
Center for Innovation and Entrepreneurship

When Isaac Hernandez started high school, he attended a Fresno public school alongside over 2,500 other students. He had ambition, but no structure, and his school simply did not have the resources to help him develop career goals or build a four-year plan.

Hernandez then discovered the Phillip J. Patiño School of Entrepreneurship (Patiño), a small magnet high school in the Fresno Unified School District that focuses on business and innovation.

Hernandez eventually transferred from his original high school to Patiño.

Students at Patiño spend their time learning the process of building a business and the fundamentals of entrepreneurship.

“All of our classes are geared toward helping students develop an entrepreneurial mindset,” said principal of Patiño Blair Sagardia.

During his senior year, Hernandez, along with a small group of classmates, launched Gavin’s Notebook, an online directory that connects families with special needs to disability services and resources. The Gavin’s Notebook website is still live, but is no longer being updated. The founding team took a step back from the project to focus on their studies as they entered their first years in college.

“If it were up to me, I would still be working on it,” said Hernandez, who is now a business administration freshman at Cal Poly. “There were many things we just couldn’t do because of our limited time and experience, but I’m very proud of what we created.”

The hands-on learning opportunities afforded to students at Patiño align well with Cal Poly’s Learn by Doing philosophy. The high school’s incubator and accelerator classes are remarkably similar to the programs offered by the Cal Poly Center for Innovation and Entrepreneurship (CIE).

Entrepreneur and Cal Poly alum Mark Jackson recognized these similarities. Jackson served on an advisory committee that provided feedback to Patiño during the school’s early development in 2015. He recommended that Patiño connect with Cal Poly and the CIE.

“We really focus on a different way of educating students,” Principal Blair Sagardia said. “It’s about applying your [education] to something real to learn at a deeper level. What we saw with Cal Poly is that students have the opportunity to do the application of learning and the real-world experiences. It was completely aligned with what our kids were learning.”

Sagardia acted on Jackson’s advice and reached out to the CIE.

CIE executives were excited by the idea of building a relationship with Patiño.

“The idea was there’s this incredible school that has an entrepreneurial curriculum, so what can we do to inspire these students to pursue college, pursue an entrepreneurial experience in college and look to Cal Poly for that experience?” said CIE Senior Director of Development Cory Karpin. 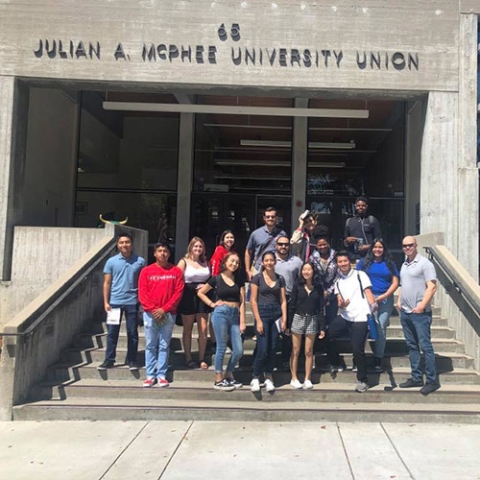 The relationship between the CIE and Patiño is now four years strong, and each year several of Patiño’s graduating seniors go on to attend Cal Poly. Nearly 10 of the 30-40 students who graduated from Patiño in the 2020-2021 school year now attend Cal Poly, according to Principal Sagardia.

The CIE ensures that even Patiño students who come from economically disadvantaged backgrounds have the opportunity to attend Cal Poly. They do so with the help of Cal Poly Scholars, a program that supports high-achieving, low-income students at Cal Poly.

“The ultimate goal is that students graduate Cal Poly, but we want to make sure that along the way, they are getting the support and resources they need,” said Cal Poly Scholars Assistant Director Alexis Melville. “The three goals we have for the program are to assist scholars in building a personal support network for college success, to foster an inclusive community of scholars and to help scholars develop knowledge and skills for lifelong success.”

Incoming students, both freshmen and transfer students, automatically qualify for the program based on their Free Application for Federal Students Aid (FAFSA) or California Dream Act application. The program currently assists around 1,200 students.

Cal Poly Scholars provides students with financial support, including a scholarship, technology credit and waived orientation fees, throughout their time at Cal Poly. The program also connects scholars with academic advisors, fosters an inclusive mentorship network, maintains a residential learning community for first- and second-years living on-campus and sponsors other workshops and programming that promote the central goals of the program.

Funding for the Scholars program comes primarily from the Cal Poly Opportunity Fee, a $2,100 fee paid by out-of-state students that is used to cover campus-based costs not covered by financial aid for first-generation and low-income California students. Certain scholars, however, receive scholarships paid for by private donors. Select students from Patiño, for example, receive scholarships funded in part by CIE donors.

Many students at Patiño are first-generation students from low-income backgrounds. When the CIE learned that several Patiño students had been accepted into Cal Poly, but turned down the acceptance because they could not afford the cost of attendance, they turned to their donors for help.

“We went to our donors with the goal of raising enough money to provide a full-ride scholarship for one Patiño student to come to Cal Poly that year,” Karpin said. “We very quickly were able to raise enough money for two full rides.”

CIE donors commit $7,500 per year, for five years, and Cal Poly partially matches that donation with $2,500, according to Karpin. These funds, along with government-provided financial aid, ensure that Patiño students are able to graduate from Cal Poly debt-free.

Hernandez was one of the two Patiño students in his year who received a scholarship from the Cal Poly Scholars program. Throughout his first quarter at Cal Poly, the program proved to be “very helpful when it comes to being acquainted with college life,” he said.

“Without my Scholars scholarship, I don’t think I would be here,” Hernandez continued. “I’m incredibly grateful to be a part of a program like this.”

Patiño fosters students’ passion for entrepreneurship, and the CIE and Cal Poly Scholars program create opportunities for these students to pursue their passion. These programs not only ensure that they are able to further their education, but provide them with support that helps them thrive as both students and as entrepreneurs.

“It’s not only important to increase access to education, but it’s important to increase inclusion and support of all students on-campus, especially those who have been historically underrepresented and underserved in higher education,” Melville of Cal Poly Scholars said. For students like Hernandez, increased access to education and educational support are seen as integral to the success of both current and future entrepreneurs.

“Being able to fund these kids who have dreams, but maybe not the finances to pursue them is essential in education,” Hernandez said. “It’s giving kids a chance to pursue their dreams, and I think Patiño is going to be dishing out some kids that have great dreams.”