What started as a senior project for one student has turned into a lasting relationship between Cal Poly and low-income elementary schools throughout the Central Coast.

Liberal Arts and Engineering Studies (LAES) alumna Emily Anderson is passionate about creating a more equitable computer science industry, and decided to tackle the issue with her senior project in 2018. To do so, she brought robots to 5th grade classrooms at Calvin C. Oakley Elementary School in Santa Maria and taught lessons that combined STEM skills with storytelling, problem solving and team building. Her students were assigned tasks such as building obstacle courses for the robots, solving puzzles, and untying “human knots.” Her plan was to provide interactive activities that would both excite and educate the students. 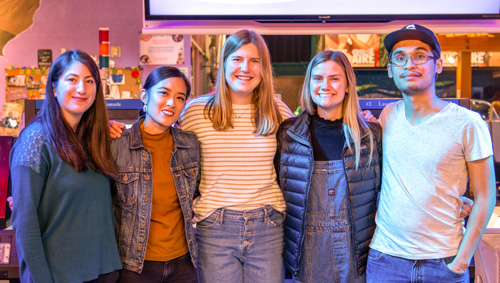 “My goal was to develop and implement a computer science education program for low income elementary school students in order to encourage academic achievement, equal opportunity, and diversity in the computer science industry,” Anderson said.

Her idea was to provide fun, memorable activities that could potentially have a lasting impact on the young students.

“As a woman in STEM, I don’t think anyone ever really told me that these opportunities existed until really late, and I wish I had that opportunity earlier on,” Anderson said.

“Kids are so malleable — especially in elementary school — that it should be introduced as soon as possible.

The LAES program directors believed in Anderson’s notion that if young kids have the opportunity to interact with STEM activities early in their development, they may be more likely to pursue a STEM field as they get older. After Anderson’s graduation, they not only continued the partnership with Oakley Elementary, but expanded the idea.

Building on the initial project, Cal Poly’s Center for Expressive Technology (CET), the LAES program, and Lourdes Espinoza, an educator and activist in Santa Maria worked to develop relationships with the Santa Maria Bonita School District and other partners including the Santa Barbara County Office of Arts and Culture and the California Alliance for Arts Education.

Cal Poly’s TRIO Pre-College Programs also provided support for the project, including logistical and financial support for the Santa Maria students to come to Cal Poly for on-campus workshops. 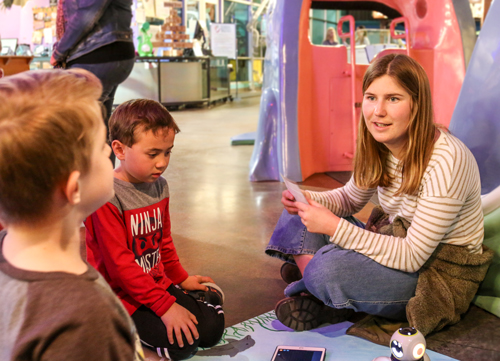 The joint effort has turned into a community-outreach project aimed at underserved elementary, middle and high school students, their teachers, and their families. The focus is on community enrichment, improving access to advanced STEAM-based education, first-hand engagement with new creative technologies, and offering career-enhancement opportunities.

Although the project has grown tremendously from its first iteration as Anderson’s senior project, the program directors plan to expand further in the future. Cal Poly students, in direct collaboration with representatives of the Santa Maria community, will work to create additional education modules. The project will also involve collaboration with several companies and entrepreneurs creating performance capture, virtual reality, interactive gaming and 3D animation technologies.

Building on this success, the new Expressive Technology Studios being built on campus will provide a new hub for this type of community engagement. Funded through the generosity of local entrepreneurs Jack and Felicia Cashin, the Expressive Technology Studios at Cal Poly will be a home for LAES majors; students enrolled in the science, technology and society minors; and any student who is looking for a place to collaborate at the intersection of art, humanities and technology.

Alum Len Filomeo, former Chief Engineer for KCPR, offers his thoughts on his time at KCPR and why he continues to support the station.