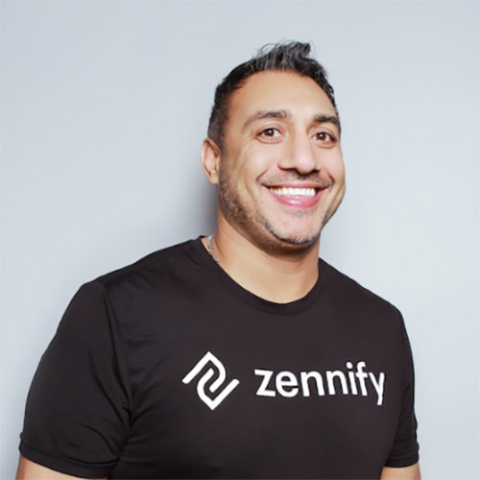 Manvir Sandhu (Business Administration, ‘96) is the founder and CEO of Zennify, an award-winning $40 million technology consulting firm based in Sacramento with over 200 employees across the United States. He was named a 2021 Most Admired CEO by the Sacramento Business Journal. Before making a name for himself in the business world, while growing up in the Bay Area, Sandhu's first love was football.

"I definitely wanted to play at the next level, so I selected Cal Poly because it had the optimum balance of a good competitive football program along with the longer-term benefit of getting a great education," he said.

A linebacker for the Mustangs, Sandhu played from 1992 to 1996 under two different head coaches – Lyle Setencich and Andre Patterson. His first year playing under Coach Patterson was the year that Cal Poly transitioned from Division II to Division I, which saw the Mustangs win the America West division championship.

"We took a beating against a couple teams early on, but toward the end, we figured things out,” he said. “We celebrated the 25-year anniversary of that championship on campus one-and-a-half years ago, and it was wonderful."

Sandhu’s time as a Mustang football player is something that he still treasures, and the bonds that he made with his teammates hold strong.

"I think the best part for me is the friends that I made along the way. We still keep in touch,” he said. “It's such a special thing that we will always have and share together. The journey of that experience is so incredible -- the trials and tribulations, the successes and failures. You grow so much. I have so much respect for the history of the football program and its heritage, and I'm so fond of my coaches -- what they individually brought to the table and what I learned from them.”

From personal experience, Sandhu knows that Cal Poly student athletes are a special bunch and thinks that their time playing sports in college will prove advantageous for them in the long run.

"You're always going to carry a special chip on your shoulder as a Cal Poly athlete,” stated Sandhu. “Often, you're the underdog playing against the bigger team. That's a very motivating thing. Cal Poly athletes have to work harder, they have to fight more, they're scrappier, and I think that's a huge advantage in real life once you get out in the workplace."

As an undergraduate, outside of football, Sandhu made sure that he was also pushing himself academically. As a business major, he specialized in accounting and built relationships with his professors, many of whom he keeps up with to this day. He credits Cal Poly's Learn by Doing approach for giving him the practical real-world skills that laid a foundation that helped him succeed in the business world.

“Both of my internships, my senior project and what I learned in class were very real-world practical,” he said. “And it's been so instrumental to me -- to this day, I use what I learned day in and day out.”

Like many of his peers after graduation, Sandhu went into the tech industry, landing a job at a Fortune 500 company where he worked for several years. Eventually, he transitioned out of finance and accounting and into various other roles, which gave him the background and experience that helped him start his own company.

In 2013, he started Zennify after an inspirational experience working with UNICEF on an infectious disease challenge following a major earthquake that devastated Haiti. With outbreaks of cholera and tuberculosis on the rise, and power outages across the country leading to compromised vaccine quality, Sandhu worked as part of a team to diagnose and solve the problem. Racing against the clock, his team designed and developed a solution that would help protect the vaccine supply. That experience using technology to help innovate and solve a real-world challenge had a profound effect on him.

“Innovation continues to be at the core of what we do,” he explained. “Our vision is to utilize technology to make an impact in the world.”

"I'd like to get more talent from Cal Poly,” he said. “I love speaking with students and sharing our story and my journey of what I've done as an entrepreneur."

He tries to come back about once a year for a visit and is always amazed at the changes on campus and around San Luis Obispo. 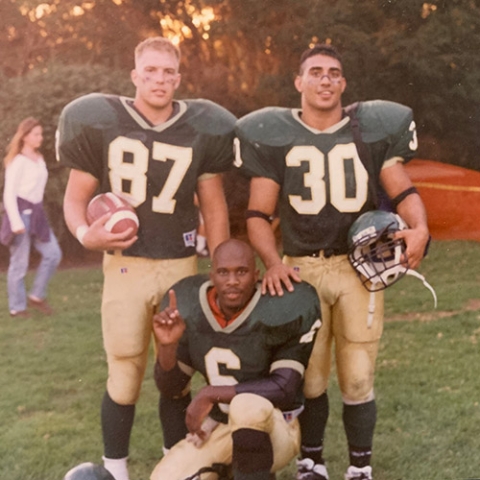 "I like the progress that has been made -- the growth, the new construction, the new buildings, the beautiful new housing, the town itself and the number of restaurants and the food scene,” he said. “At the same time, there are some things that are the same that remind me that it's still good old Cal Poly at the end of the day.”

As to his thoughts on the differences between the current Mustang football team compared to when he wore the uniform?

“I must admit that I'm a little jealous of the football stadium -- we didn't have that, and they've definitely got some cool facilities,” he said, tongue in cheek. “But you know what? They deserve it. It's awesome to see the new uniforms, the new gear, the swag -- and to see the school invest in that."

Giving back to his alma mater is also especially important to Sandhu.

"Cal Poly made me who I am and played a big role in my life, whether it was sports or in the classroom,” he explained. “It helped me get a job and helped me succeed at that job. I learned the key building blocks that would help me become successful. I am where I am today because of the experience and the education that I had and the opportunity that Cal Poly gave me. And so, I'm very proud to give back."

With football as his passion, Sandhu gives to the program that he loves so much – supporting the Mel Kaufman Football Scholarship that benefits first-generation student athletes from low-income families.

“I'd like to see the football program get to the next level, and it does take investment. It does take some commitment,” he said. “There's a very tangible connection between the funding and what they need and the output that you get. I like that. I think that's important because you want to know that your money is going to the right things.”

And he wants his fellow Cal Poly alumni to know that gifts of all sizes matter, no matter what area of campus they choose to support.

“I think people don't understand that any little bit matters and counts,” he said. “There's no shame in the amount that you give. I think that people may be insecure about that, but giving a little bit, whatever you can do, makes a difference.”

It’s obvious that Sandhu sees a bright future for both the football program and his alma mater and will continue to cheer on his beloved Mustangs for years to come.

Jason Maas, who was drafted by the New York Yankees, supported the effort to create the Dignity Health Baseball Clubhouse.

This former three-year captain of the Cal Poly Softball team sets an example for current players both on and off the field.