Angie Simon (Environmental Engineering, '86), a three-year captain of the Cal Poly Softball team and a dedicated Engineering graduate in the Class of 1986, proved both athletics and academics can be executed with focus and determination. At the time, she was approached by many of her professors who expressed concern regarding a woman balancing her engineering coursework with a rigorous softball practice and travel schedule. Angie was one of two women enrolled in the engineering program out of 100 students, so proving she belonged in the major became routine.

“When I was looking for a job after graduation, I used the fact that I played softball as a selling point," said Simon. "I was a captain for three years, so I could communicate well and knew how to lead a team. This is very important to most businesses, since student-athletes learn to juggle their athletic commitments and coursework."

She continued this trend throughout her career, becoming the first woman to sit on many esteemed boards in her industry, including her role as President of the Sheet Metal and Air Conditioning Contractors' National Association (SMACNA). Angie pays it forward in her career by advising the younger female generation, especially those who love math and science, to pursue careers in engineering and continually shape the industry with diversity and inclusion. 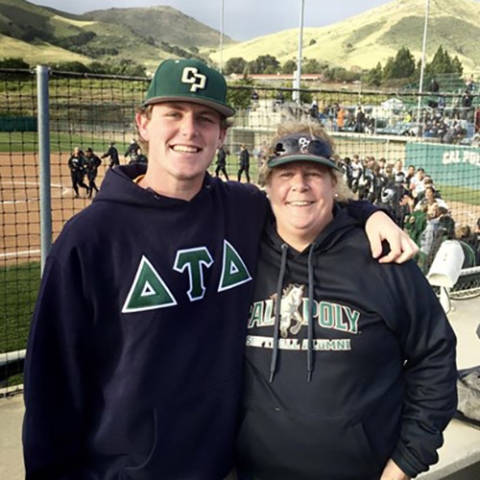 Simon notes that she is able to achieve her goals with a solid support system -- her husband, Michael and her two sons, Benjamin and Alex. Benjamin is a Cal Poly Industrial Technology graduate and currently works alongside Angie at Western Allied Mechanical, a mechanical contractor and leader in the construction industry.

Simon’s fondest memory from her tenure at Cal Poly is her last home game as a senior, where she faced her younger sister, a freshman pitcher for UC Riverside, with the biggest audience of the year. At the time, the softball field was at the heart of campus and with Poly Royal hosted simultaneously, the crowd was much larger than usual due to passersby. Simon got a hit off her sister and the Mustangs took the win, celebrating the senior class's last opportunity to compete on campus.

Simon notes that this event, with the invested fans packed around the field, is a memory she is heartbroken this year’s senior class will not experience due to COVID-19 restrictions. She would have been devastated if she was in their shoes, so she is doing everything she can to help them achieve the best possible season.

Simon was one of several Mustang Softball alumnae to help fund the new batting cages found at Janssen Field today. Simon and husband Michael have also established an endowed scholarship to help financially support female student-athletes who pursue an engineering major. She notes it is imperative to financially contribute toward the education of our Mustangs, especially during this time of uncertainty.

“As an alumna, I see how others’ contributions helped me have the amazing experience I had," she said. "I always stress that you can’t take the generosity with you. You have to give back so others can benefit the same way we did when we played. It’s not only the right thing to do, but it’s all worth it when you see how appreciative these student-athletes are for improving their experience.”

Simon wholeheartedly believes that it is vital to support student-athletes, as well as aspiring engineers, in any way she can. As someone who regularly hires college graduates at her hundred-million-dollar company, she notes that female student-athletes thrive in the industry and create successful careers as long as they have the confidence to get there.

She consistently encourages women to be more comfortable entering male dominated industries by studying engineering in college, especially if they are passionate about making a difference. More women in positions of power will inspire younger generations to confidently take those steps forward to influence and innovate challenging industries.

“I truly believe that the younger generation will change the world," she said. "This upcoming group of adults will be far more inclusive and accepting of others, assessing people strictly based on what they bring to the table professionally. It’s not just about considering a diverse group of people, it’s also about including them and making them feel welcome once they’re there. I already see the next generation of workers striving to improve this to create a more inclusive environment.”

Jason Maas, who was drafted by the New York Yankees, supported the effort to create the Dignity Health Baseball Clubhouse.