Skip to main content
College of Science and Mathematics

A Passion for Reptiles

Biological Sciences Professor Emily Taylor is Cal Poly's resident expert on local snakes and lizards. Since 2005, Professor Taylor has headed up PERL -- the Physiological Ecology of Reptiles Lab -- which consists of both master's degree students and undergraduates doing research on the local reptiles of the Central Coast.

"I try to focus on giving them the full research experience," she said. "That includes everything from coming up with the idea for the project, doing the data collection and analysis, presenting it at conferences, and then actually writing and publishing the paper which often times helps them realize they want to become a scientist."

Last year, Taylor convened a group of five women PERL students who were interested in the history of women in herpetology, which is the study of reptiles and amphibians. Their goal was to quantify the number of publications that were authored by women, one of the major metrics of professional success among academic herpetologists. "We collected data over the past 10 years on every single publication -- hundreds of thousands of publications on amphibians and reptiles -- and quantified the number of women versus men authors," Taylor said. "We found a little less than one-third are women. But even in the past 10 years, it has been going up at 3% per year. We've seen a notable increase. In the 1970s, only 10% of papers were published by women. It has basically tripled, with most of the rise within the last 10 years. For 30 years it was relatively stagnant at 10 to 15%, and it's just shot up recently to 30%." 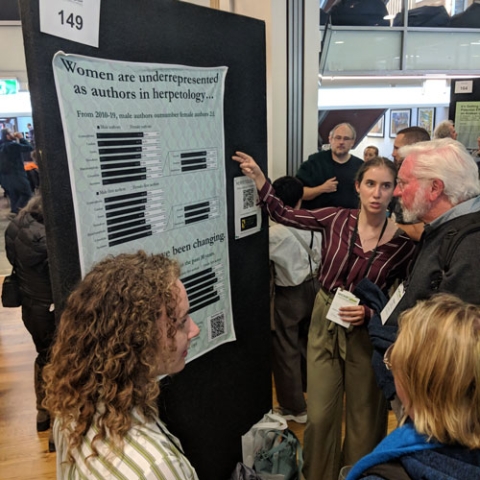 With this data in hand, Taylor wanted to make sure that her students could share their important findings with the larger herpetology community. But funding a trip with students to a large conference was going to be expensive, especially the one they had their eyes set on. "Once every four years a big conference is held, an international one, called the World Congress of Herpetology. I'd only been to one of them before, and I've never been able to take students. This one was in New Zealand, which was very attractive to us because of its incredible biodiversity and because we had this data set about women in herpetology that is so current and of so much interest right now. We really wanted to have a chance to present our findings there." But the trip would cost around $3,000 per person to cover everything, including travel, conference registration and lodging.

To raise the necessary funds, Taylor turned to Cal Poly's crowdfunding platform, Spur Change. This platform typically is used to raise funds for projects through a number of smaller donations. With a $15,000 fundraising goal, Taylor was hoping to secure enough funding to take a team of five people -- two graduate students, two undergraduates, and herself -- to the conference for just under a week. "When I put together the budget, I thought maybe I'd pay my own way, and then I'd get one or two students to go," she said. "When I saw these generous donations coming in, I felt really good. We had 100 donors."

A lot of donations came from her colleagues in the field of herpetology at universities across the country. "I felt they were supporting me and the cause," Taylor said. Even some of the other PERL students who weren't directly involved in the project, and who don't have much money, donated $5 in support of their female lab mates. "It was really mind blowing," she said.

Ultimately they achieved their fundraising goal, and in January 2020, the five were able to travel to New Zealand to attend the conference and present their findings. Taylor is grateful that she has these fundraising tools available to her and knows how important these donors were to her students’ valuable experience.

"I want to say thank you," she said. "I think that people who aren't in the public university system don't realize how important even these small donations are to our university. This is not some nebulous chain of money that you never see -- this is direct impact. Our students thrive in this Learn by Doing community. These opportunities don't exist at many schools. Very few of my colleagues could bring their students to the World Congress. It was a really transformative experience for my students."

Supporting the Mustang Family One Dream at a Time

The Kostalnick family has found a way to give back to the Cal Poly community they call home.